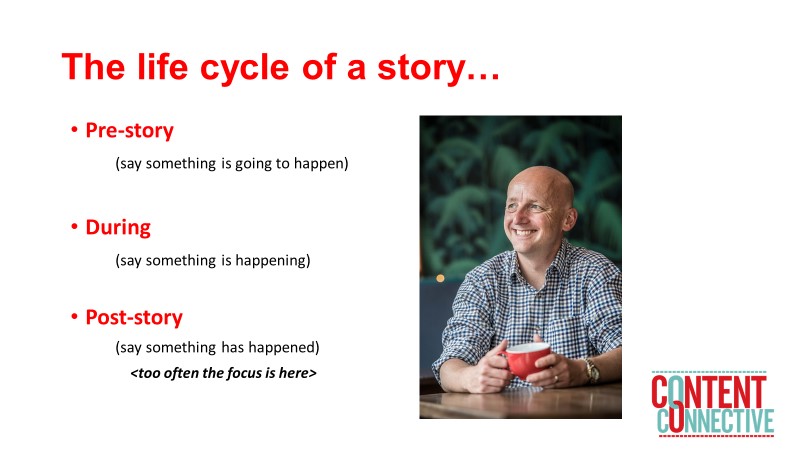 Have you ever wondered how to squeeze as much as you can from a single story?

Well, journalists have this little trick for doing just that.

It’s simple really, but most people – particularly those without a media or marketing background – will never realise it. And here’s why – because usually the time you start to think about telling a story is when it’s too late, ie after it’s already happened.

And that’s no surprise, after all the chances are telling other people what you are up to is normally an after thought (unless you are really switched on and media savvy, in which case you probably don’t need to read this).

But for most journalists that’s of little or no interest – unless you are talking about something EPIC. Nope, good journalists are interested in what’s going to happen. Ideally they want to break that to people before everyone else gets wind of it. And that’s a mindset that you should adopt for your readers/followers/customers too.

Because actually for any journalist worth their salt – that is where their value truly lies.

So how can you go about incorporating this mindset in your organisation or business? We all know that stories have a ‘beginning’, a ‘middle’ and an ‘end’.

But while that goes for the structure of a story – the same is also true for when you promote and publish something too.

In the world of journalism we’d call this:

If you want to get more advanced than this, then there are two others that are worth thinking about too

4. The follow up (revisit the story a few days later to see if anything has changed or there is some extra info you can tell people about)

5. The anniversary story (A bit like the follow up but after leaving a bit more time – say a month, six months, a year – sometimes you’ll see this dressed up as a ‘look back through the archives’

Say something is going to happen

As you might have guessed pre-story is before the thing you are talking about has taken place, or in other words: ‘We’re super excited about our ‘open day’ next week – check out Jill, who is getting everything ready’

Say something is happening

Then there is the ‘Now’ story ie something is happening right now and you can tell people about (via Facebook, Twitter, Tik-Tok, Linkedin, whatever you like really, and using hashtags and tagging people in while you think about it, too). Digital and social is what really makes this possible, and you probably do it yourselves when posting about other people’s stuff, or things you are going along to, so why not post about your own stuff, too?

Or something like: ‘The doors are open and Jill is super busy right now’ (with accompanying photo/video, of course). The Now Story is often a running commentary on an event, or dressed up by journalists as a ‘live blog’. I often do this on Linkedin posts for example. The only thing is it can be difficult to follow if there are a lot of updates going on.

Say something has happened

So this is where most people think that a story starts – typically the conversation may go something like this ‘have we told the media about this?’ or ‘why don’t we tell the press about this’.

Do not start here!

And like I said at that point it’s quite possibly too late – though never say never of course, particularly if you are dealing with publications with weekly or monthly deadlines.

But of course you shouldn’t really just be thinking about getting something published in the media – this kind of thinking is also useful when thinking about creating your own content publishing schedule.

And the good news is you are probably posting on social media already – you just may not be thinking about it on a coordinated way. And if you are? Then well done you!

Warning: while squeezing as much as you can from a single story is good – remember to try not to overdo it! ( You can have too much of a good thing)